To begin with, thank you so very much to everyone that reached out directly and/or posted such kind and encouraging words and support. It means a lot and certainly helps when dealing with something concerning and unnerving–especially medically related.

The preamble: After the tour finished in early May, I hadn’t played for a few weeks, as the gear was enroute to Los Angeles from the East Coast, and I also had plenty of non-drum-related business to catch up on. My next time on a kit was for a NAMM show performance in an all-star band playing a variety of cool covers with some of the guys from Pink Floyd, Kid Rock, The Firm, etc. I showed up for the gig (gear was supplied), walked on stage, sat down, counted off the first tune, and the second my left hand hit the snare on the first backbeat, I thought I was going to pass out from the pain! It felt like a burning-hot dagger was being thrusted into my pinky every time the butt end of the stick made contact, so I switched over to traditional grip to finish the gig, but it was brutal nonetheless.

I thought it was a splinter (or tiny sliver left behind) which I had gotten and removed the day before, or that I had possibly bruised the bone while moving some heavy equipment, so I gave it a rest for a bit, but it just got worse. After seeing a couple of doctors that I did not feel confident with, I went to see the top hand specialist at Cedars Sinai [Dr. David Kulber, for those of you who followed the Depp/Heard trial], who, via ultrasound and MRI, found a mass in my left pinky located on the inside of the middle joint and directly under the ulnar nerve. Normal everyday activity was fine, which is why I didn’t notice anything, but as soon as I did something that caused it to hit the nerve (such as playing a backbeat or lifting something heavy), the pain was excruciating and unbearable. I had no choice but to undergo surgery asap since it was impossible to play, getting worse, and tour dates were being booked. 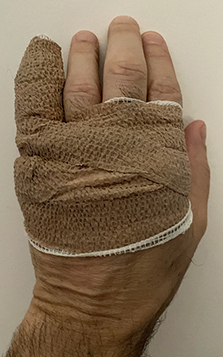 The epilogue: Had my surgery yesterday and the doctor reports that all went extremely well and was one-hundred percent successful with complete removal of the tumor.

Follow-up next week, then the stitches come out three weeks later and I should be back to playing/rehearsing, as we’ve got some new material and surprises for the next string of dates.

Once again, thank you everyone - see you soon!

A little bit of Siberia to warm you up…

We regret to announce that our April 8th show at Des Plaines, Illinois, has been...

Another Update From Jonathan Mover...

Video: ProgJect Live at the...

A Personal Message from Jonathan...